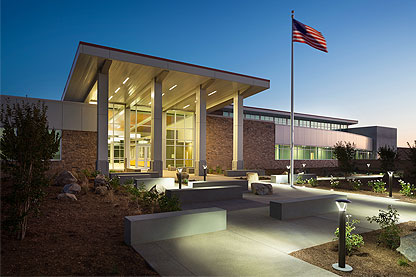 Located in Santee, the Las Colinas Detention and Reentry Facility (LCDRF) serves as the primary point of intake for women prisoners in San Diego County.

The facility opened in August 2014, replacing the old Las Colinas Detention Facility. That facility was built in 1967 and operated for a period of time as a juvenile facility before becoming a women’s facility in 1979. The new facility is staffed by approximately 278 sworn employees and 143 professional staff members. With the new facility comes the implementation of new operational philosophies.

The first of these new philosophies is “Open Booking.” This booking model is new to San Diego County, replacing traditional Intake/Booking setting where inmates were moved between holding cells as they complete the booking process. In the Open Booking approach, inmates will be seated in an open seating area and will be called to medical screening, booking and other areas of the booking process. Holding cells are used only for inmates whose actions and classification levels require them to be separated or treated more securely. Once the inmate finishes each segment, they will return to the seating area and wait to be called upon for the next booking step. During this time, the inmate will also have access to telephones and restrooms. The new Open Booking area will also feature new technology with the addition of a body scanner. The body scanner will assist greatly in the detection and prevention of drugs and contraband entering our jails.

Another new operational philosophy employed at LCDRF is “Direct Supervision.” Under this philosophy, deputies are stationed in inmate housing areas rather than being segregated in deputy’s stations apart from the inmates. This allows for greater interaction between inmates and staff and the ability to resolve conflicts before they become more serious problems.

With improved facilities and academic/pre-employment classes, reentry services are another emphasis of LCDRF. Inmates will leave better prepared for successful reintegration to the community, lowering the chance of reoffending.