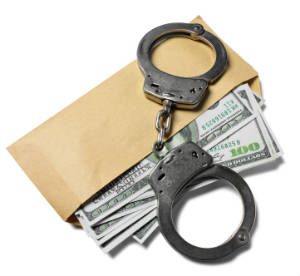 Bribery is a serious offense in San Diego and the law punishes both those who elicit a bribe and those who offer one.  Irrespective of the players involved, both parties are treated harshly under California law.

If you or someone you love is faced with bribery charges contact a San Diego Bribery Attorney at the law firm of The Hullinger Firm for a FREE and confidential consultation.

California bribery law vast and covers a number of Penal Code sections.  It can be summarized as follows:

Bribing ministerial and public officers in California is prohibited under California Penal Code Section 67.5 and is typically a misdemeanor unless the item given or offered is greater than the value required for grand theft.  In that case, it’s a felony charge.

Any elected official who accepts, solicits or agree to accept anything of value from another person illegally in return for using his/her position and office for the benefit of that person is guilty of bribery in under California Penal Code Section 85 and 86.  Bribery involving legislators, or other elected officials, is equally punishable in California. The person who offers a bribe as well the official who asks for the bribe can be convicted under the California bribery law.

The bribery charges against local government officials and county supervisors are considered under California Penal Code Section 165 makes it a felony and may lead to forfeiture of office and imprisonment.  This statute equally applies to common council members, public corporation members, board of supervisor’s members and other trustee members of the city board.

Any action to illegally influence a witness regarding the testimony in court can be convicted of bribery in California under the penal code sections 137 and 138 pc that would lead to severe punishments. It is a serious offense and often a felony if a witness is corruptly influenced to modify his/her testimony in the court in exchange for something of value.

Commercial bribery charges are quite common in the business arena and occur in business settings. It is a serious offense covered under the California Penal Code (PC) Section 641.3 that may adversely affect the career and reputation of involved parties.

What Constitutes Bribery in California?

If there is a clear and static corrupt intention involved in the bribery charge, it makes the bribery charge strong and may result in felony. You have a perfect defense only if there is room to prove the absence of a corrupt intention. Finding the right defense mechanism may be effective if you approach an expert attorney of the San Diego law firm of The Hullinger Firm who quickly build up a strong and effective defense strategy. The defense elements may be tailored on any of the following factors:

Bribery is a serious legal offense in California under the bribery law. There are different punishments and penalties under the law and in most of the case it is treated as a felony. If convicted of a bribery in California, a defendant faces severe punishments.  Punishment may include:

Charged with Bribery in California?

Your freedom and career may be at stake if you are convicted of bribery in California.  An immediate and effective investigation is needed to frame your case successfully. If you are looking for expert strategic advocacy in California, call a professional criminal defense attorney from the San Diego law firm of The Hullinger Firm.

Looking for result oriented and aggressive advocacy? Call an expert attorney from the San Diego law firm of The Hullinger Firm.